TOG ACADEMY: the Renegade Legion Wiki
Register
Don't have an account?
Sign In
Advertisement
in: A to Z Index, Factions, Governments 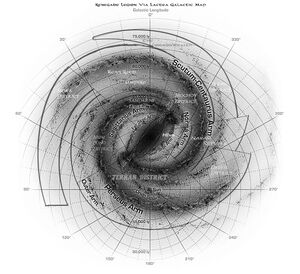 The Commonwealth is an interstellar alliance comprised of some 40,000 inhabited stars at the far ("dragward") end of the Orion arm of the galaxy. From end to end, it stretches approximately 45,000 light years and is divided into 21 Grand Dukedoms. Each Grand Dukedom has about 50 Counties, and each County has 40 to 50 inhabited planets. With (on average) 1.3 habitable planets per star system, the Commonwealth is densely populated with humans and Baufrin, along with refugee Naram, KessRith and Ssora contingents. Native alien species, including the Menelvagoreans, make up 10% of the total population.

Map of the Commonwealth

The political organization of the Commonwealth is based on the parliamentary systems common to Earth and other human worlds before the Snow Plague and subsequent slavery. Each world has a House of Commons and House of Lords, with a Prime Minister chosen from the House of Commons to head the government. A Baron, appointed by the Count or Duke of the area, oversees the Prime Minister and insures a lack of despotic rule.

Counts administer the Commonwealth on the County level and Dukes handle business on the Dukedom level. On New Britannia, the capital of the Commonwealth, the "first citizen" is titled the Regent and administers the entire government. With each of these upper levels of the government, the nobles meet in a House of Lords and elect their representatives to the next level, culminating with the Grand Dukes electing the Regent.

The Commonwealth is unique in that it treats all species in an egalitarian manner. KessRith, Baufrin and Humans have all served as the Regent. By far, the Baufrin Regents have been the most controversial. Suphra Decla signed the peace with the KessRith, angering Alexander Trajan. To' Siptos, successor to Debora Stevens and thus the Regent during Ivanolo's usurpation of power, embroiled the Commonwealth in war with the Terran Overlord Government by refusing to return the Renegade Legions to TOG justice.

The present Regent is a human named Stephen Lukanther. The youngest Regent to date, at 48 years old, he was raised by KessRith on the planet of Gaul. He distinguished himself as an armor commander with the Commonwealth, and after helping defeat a corrupt KessRith regime on his homeworld, worked his way up to become the Grand Duke of the Gaulish Dukedom. From there, he was elected Regent despite rumors that he is prejudiced against the KessRith. In response to such rumors, he points out that all of the friends of his youth are KessRith.

Unfortunately for him, TOG agents managed to abduct his wife in 6829 to serve as bait for a trap - planning to get both him and any Renegade Legions who might try to rescue her. Lukanther's rescue attempt succeeded, but some advisors believe TOG did not put up a real defense against Elizabeth Lukanther's return. It has been suggested she may have been turned by TOG and the Lictor, so Stephen has been somewhat distant to his wife since her return. It is clear that this separation is tearing at both of them.

The people of the Commonwealth are both too ordinary to spend much time discussing and too diverse to be described in under 100 pages. As mentioned above, they are an egalitarian society, with little evidence of racial or sexual prejudice. Many fleeing refugees see in them a perfect society. However, this perception is twice-colored by TOG. First, they're comparing the Commonwealth to TOG, and since they're discontent with TOG, they naturally find the Commonwealth preferable. And second, the Commonwealth is on a war footing. Its energies are directed against a common foe, unifying it and leaving it little time for friction from within. If the Common-wealth weren't concentrating so completely on survival against an exterior threat, it might find more to fight about among its individual societies, races and worlds.

Fortunately, the Renegades are single-minded in their desire to destroy TOG. They actively recruit from Commonwealth worlds, and accept trained military refugees from TOG space. Refugee recruits are thoroughly checked out by agents still within TOG, and Lictor spies are dealt with ruthlessly when uncovered. The Renegades maintain their own academies for training recruits, many of whom come from the growing number of Renegade homeworlds in the Commonwealth.

Cross-training and cross-service of officers between the Renegade Legions and the CAF has lessened much of the tension between the two services. The Renegade Legions are seen by almost everyone in the Commonwealth as the superior fighting force, and not just because of superior numbers, yet they accept CAF leadership whenever necessary. (More than one heated discussion has been had over the Renegade and Commonwealth definitions of the word necessary.) Commonwealth citizens recruited as legionnaires consider the recruitment an honor, and most readily accept.

The Renegade Legions are organized along the lines of the TOG military forces. RL uniforms combine bits and pieces of Commonwealth styles with material that dates back to the New Roman Republic armed forces. Prominent now is the graffiti R that marks both uniforms and ships in the Renegade Legions. It has been adopted by the expatriots as an emblem of solidarity with the Renegade underground, which many of them have personal reason to thank.

The Commonwealth Armed Forces are divided into quite a few organizations and branches - enough, in fact, to make the average Ssora weep. Half of the 200,000 Commonwealth Legions follow the TOG/RL table of organization, though they retain their own rank insignia and titles. The other 100,000 Legions are structured into units favored by one or another of the different species in the Commonwealth alliance. A list of titles and descriptions includes:

B'ekkal (Naram) units are those patterned on the Naram style of combat. Fast but lightly armored, they rival Legions in size and are peopled by Naram and Humans for the most part.

KessRith legions tend to be smaller than Renegade legions. They pack lots of power, but lack the ease of mobility seen in B'ekkal units. Still, they can take lots of pounding and still be around to fight, so discounting them would be a mistake, especially when they hold an entrenched position. Menelvagoreans like service in these units.

Baufrin units split the difference between the previous two. They have fair mobility, but can't weather an assault like a KessRith unit can. They are valued for their ability to follow up and reinforce - equally competent when exploiting opportunities created by B'ekkal units or succoring a besieged KessRith unit.

Vauvusar units, the few that exist, hit hard and use their mobility to compensate for their almost total lack of armor. They join in battles almost at a whim and only their quick-strike cavalry makes them tolerated on the field of battle by their allies.

The Service Branches of the CAF are each distinct and separate, and there is an obvious rivalry among them. While this might seem bad on the surface, this unity of one branch against another helps to bleed off what might otherwise arise as racial tension among the different species.

Sky Marshals are selected from among the leadership of the CAF to administer vast fronts in the battle with TOG. This is more than a ceremonial position, and its responsibilities have broken more than one commander. While they have been likened to Overlords, this analogy is not accurate. Perhaps better would be a comparison to an Imperial Warlord appointed for duty in a specific County or Dukedom.