TOG ACADEMY: the Renegade Legion Wiki
Register
Don't have an account?
Sign In
Advertisement
in: Technology, Communications, A to Z Index 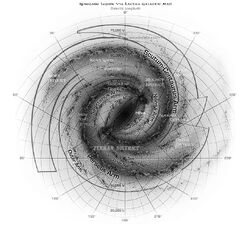 Faster-than-Light travel is possible in the Renegade Legion universe by spaceships that enter Tachyon-space, also known as T-space. T-space travel requires a ship to accelerate under computer control along a precise flight path before activating the T-space drive.

Once inside T-space, the ship cannot turn in any direction, as T-space does not follow the normal laws of physics. In addition, the energies involved will build up within the solid matter of the ship and crews, permitting no more than a month of travel (725 hours) in T-space before becoming dangerous. An equal amount of time must be spent in the real space to dissipate the energy, known as Shimmer Heat, so named for the visual shimmering visible in living beings after they have spent time in T-space.

Exceeding the recommended maximum of 725 hours in T-space will result in the unpleasant death of the overcharged living being. This results in a practical limit to distances that can be traveled in a month's time, dictating the form of the interstellar transport system that supports stellar empires.

Tachyon Space, or T-Space, is essentially a dimension that exists perpendicular to the normal universe ("N-space"). In that dimension, the minimum speed that an object can exist (and travel) is at 12 times the speed of light.

Travel over interstellar distances follows several basic steps. The first is for the ship to aim itself in the direction of its intended destination. This aim is very important, since all travel in T-Space occurs in a straight line.

Second, the vessel must he moving at a high speed. A ship's speed before entering T-Space is directly proportional to its velocity in T-Space. The slowest possible speed in T-Space is 1 light year per month (LY/month). The fastest speed is 10,000 LY/month. The minimum entry speed to T-space is 27,000 kph. The minimum time possible in T-space is .018 seconds and the minimum distance that can be jumped is .5 AUs (one sector).

The maximum time that an object can spend in T-Space is 725 continuous hours, or just over 30 days.[1] For every hour of accumulated T-Space travel time, a person must spend an hour in normal space. The evidence of this accumulated time is an increasingly bright glow called Tau Shimmer. If a character approaches 725 hours, he starts to glow with Tau Shimmer. If he exceeds that limit, he begins to take damage at a rate of 1 CN point per excess minute. An average character will be severely injured after 11 minutes of excess time, and dead within 35 minutes. There is no saving roll or medical treatment that can prevent this unfortunate and deadly result. Inanimate objects are affected just as drastically; an object with over 725 hours of accumulated time in T-Space implodes, turning itself inside-out.