Say "fighter" to any TOG citizen and the image that immediately comes to mind is the Spiculum. Sleek and deadly looking, the Spiculum is a publicist's dream. Any telecast of a battle has the obligatory shot of a Spiculum flying through the fiery debris of an exploding Commonwealth ship.

With all of this hype, cynics would automatically assume that the Spiculum is a mediocre fighter, but the reverse is true. The Spiculum has tremendous acceleration, good defensive systems, good secondary armament, and carries a considerable punch in the form of missiles. The high speed, light secondary armament, and heavy missile load is the result of current TOG tactical doctrine and fighter deployment.

The Spiculum was designed at the height of the "Second Tactical Doctrine" that was started with the development of the Saxum light fighter. Where the "First Doctrine" was implemented against the technologically superior KessRith and took into account the often desperate tactical and logistical situation, the Second Doctrine saw TOG in a comfortable position of superiority. Solid lines of supply enabled fighters to carry more expendable munitions; advanced crystal-bonded alloys made thicker armour possible, and lasers had been improved to the point where they could drill through armour without the need of secondary particle or mass driver weapons to assist them.

Second Doctrine fighters like the Spiculum are supposed to close, deliver their missile ordnance, and either retreat to a nearby carrier or base to reload, or finish off damaged enemy fighters with a well-placed laser shot.

The Spiculum´s elegant lines and fragile appearance belie its underlying strength; its molecular-bonded armour is thicker than that of most Commonwealth heavy fighters. The twin Promethium engines are state-of-the-art and provide abundant thrust. The downside is a high maintenance cycle; the "Spic" is an extremely fine-tuned fighter craft that does not take well to improvised repairs or neglected maintenance.

During the first years of TOG´s invasion of the Commonwealth, the high consumption of missiles and intensive maintenance necessitated by the Spiculum was hardly a problem; TOG pushing the battlelines forward meant that carrier craft were always at hand to provide reloads and repair, and supplies flowed easily.

As the invasion became bogged down and an increasingly paranoid Caesar started cutting supplies to his most successful Grand Admirals and Overlords (whose success at the front might have pushed their own ambitions to the throne), Second Doctrine squadrons felt the pinch. Where at first everybody had been clamouring to get their hands on the modern Spicula, Gladii, Manubalistae and Lanceae, many wing commanders now started to request older and more rugged fighters with a conventional armament that they could keep flying without too much reliance on the logistics train. To date, many of the Spicula still operating in the Shannedam Province theater are short on missiles and forced to engage enemy fighters directly with their lasers.

The Spiculum is a fighter often used for fleet engagements at the squadron level. Its high missile load is often used against other fighter formations, but it is not unusual to have a flight or group of Spicula waiting in the wings to finish off a damaged Leviathan with its flicker shields down.

Since Spicula often expend their munitions early in the battle, the captains and deck crews of their carrier vessels tend to get ample experience with recovery, reloading and re-launching their fighters in the middle of a Naval battle.

The Spiculum is a standard medium fighter to be carried aboard capital ships and carriers assigned to raiding action. With its high acceleration and large missile load, it lends itself to fast in-and-out attack missions, while its strong armour enables it to weather defensive fire while it executes a strike at its target.

In a defensive role, Spicula are often used to patrol TOG space. Their usual role is to detect enemy vessels, fire their missiles and return to their base to report the sensor contact. While this is very effective when dealing with raiding fighters and patrol-class craft, against the shields of destroyers and frigates raiding a TOG system the missiles have proved ineffective. TOG military planners have taken note and are considering assigning more conventionally armed fighters to system patrol duty. 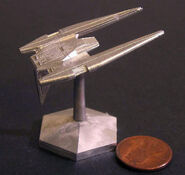