TOG ACADEMY: the Renegade Legion Wiki
Register
Don't have an account?
Sign In
Advertisement
in: Real World, Games, A to Z Index 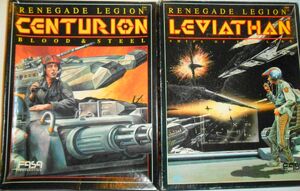 Each of the boxed games in the Renegade Legion series uses a template-based mechanic to determine weapon damage. When a unit is hit by a weapon, an additional die roll is used to determine the hit location; a geometric template is placed on the ship diagram at that location, and the armor boxes beneath that template are marked as destroyed. Each weapon has a unique template; more- or less-powerful weapons use larger or smaller versions of a standard template. The intent is to add depth to the game system beyond simply counting up damage points, as in FASA's BattleTech, as weapon type and hit location can now be important to game resolution.

Another key aspect of the Renegade Legion series is interoperability. All of the games in the system include rules for simultaneous play with the other games, for example, using the Starfighters from Interceptor as support for the action in a game of Centurion.

Renegade Legion games first shipped with die-cut cardboard "boxes" as some of the playing pieces; each side of the "box" depicts the unit from the appropriate angle (front, back, side, top, or bottom.) The second edition of Centurion replaced these with plastic miniatures.

Interceptor was the first game of the Renegade Legion series, and is based on single- or two-crew starfighter combat. A second Edition of the game was announced but not published. Interceptor uss a complex diagram of ship systems to track internal damage; this feature proved difficult for some players to use and was not carried into the other games of the series.

Leviathan covered capital ship combat. The starfighters from Interceptor were represented not as individual units, but as whole squadrons launched from massive starships. While Leviathan used the same template-based damage resolution mechanic as the other games, the templates were much less complex.

Prefect was a more traditional wargame with large fold-out maps and hundreds of small cardboard counters, that shifted the action from the tactical level to the operational and involved the invasion of an entire star system. The player of Prefect was a high-level commander in either the TOG or Commonwealth forces and controlled thousands of ships, tanks and soldiers fighting over multiple worlds and millions of miles of space.

Circus Imperium was the fifth of the Renegade Legion board games published by FASA, but unlike the others in the series, this tongue-in-cheek game of chariot racing was played strictly for laughs. The game involved anti-grav chariots being pulled by carnivorous beasts, with the object of the game to defeat the other racers, usually by knocking them out of the race or getting them eaten by the monsters. Outcomes of player actions were often random and unpredictable, and players could get points for eliciting laughs or the loudest cheers from other gamers. Ral Partha produced a series of lead figures for the game, including chariots, senators and imperial guards. Older catalogs have had these figures present as items available to order but in the exchange of BattleTech figures the Identifiers have changed. There were 3 variants under the old Ral Partha banner dependent on country of purchase.