TOG ACADEMY: the Renegade Legion Wiki
Register
Don't have an account?
Sign In
Advertisement
in: A to Z Index, Technology, Communications 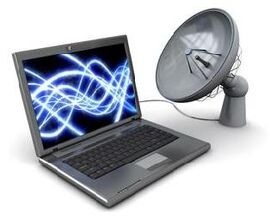 P-Comm is faster-than-light communication related to T-space travel. The range is limited, but it is possible to communicate with nearby star systems. The devices are small enough to fit onto small spaceships. However, the P-comm cannot be used while actually traveling in T-space.

Hand-held devices may be used to communicate at relatively short ranges (from surface to orbit, for example, or from a planet to its moon) using the P-comm network channels.

More than a hundred years after the development of T-space travel, the scientists of Delta Alphecca discovered the Phase-Polarization Communication (P-Comm) System, with help from alien scientists of Huldice.

The basic principle behind the P-Comm system is relatively simple. When an electromagnetic wave is passed through a wave grate generator, polarization occurs. Those portions of the electromagnetic wave not lined up with the wave grate being generated are filtered out. If two wave grates were operating with their wave directions at right angles to one another, they would effectively block the electromagnetic wave from passing beyond the second wave grate. What no one understood was what happened to the energy present in the thwarted wave. It remained a mystery until the scientists of Delta Alphecca passed a Tachyon detector behind two working wave grates and discovered that an extremely energetic system wave of Tachyons was being emitted.

To test their momentous discovery, the scientists set up two identical sets of wave grates and radio sets on two different planets. On July 4, 2257 (Standard Calendar[1]), the scientists on Delta Alphecca huddled around their receiver waiting for some word from the Huldice scientists, who were on Omicron Tau, some 20 light years distant. Through the fuzz and crackle, they suddenly heard a clearly audible message from the jubilant Huldice.

The beauty of the P-Comm system is its simple technology. (Indeed, it is so simple that almost anyone can construct a crude P-Comm system to listen in to what the galaxy is saying.) The P-Comm system also compacts easily onto a group of circuit cubes, and so is suitable for use by even the smallest ship.

The P-Comm system does have its limitations. The easiest to overcome is the static that grows more and more severe as transmitters become more distant. A good filter and leveler system solves this problem, making it possible to send and receive at longer distance. A ship cannot transmit or receive using a P-Comm while traveling in T-space, which could be inconvenient. It was not until Humanity had colonies scattered clear across the galaxy that the P-Comm's most serious limitations became evident: messages sent via P-Comm could travel no faster than 20,000 ly/month[2]. With some empires of Humanity being 70, 80, even 90,000 light years in diameter, it meant that a message would take four months to arrive, and the receiver four months to respond. Such slow, unwieldy communications put an empire at the mercy of any enemy that could move fast enough.