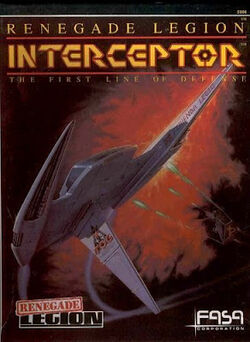 Interceptor is the first game of the Renegade Legion series, and is centered on single-pilot or tandem-crew starfighter combat. Interceptor uses a complex diagram of ship systems to track internal damage; this feature proved difficult for beginning players to use and was not carried over into the other games of the series.

The First Edition has two printings; 1987 and 1993. The second printing has some minor differences from the first, such as matte-finish maps instead of glossy.

A second edition was planned, but never released.

""In The Battle Between Good and Evil This One Counts!"

"The Terran OverLord Government rules all but a thin sliver of the galaxy with its Iron Fist. Resistance is useless. Soon the Commonwealth with their Renegade Legions will kneel to the might of TOG. The Glory of New Rome will be spread throughout the stars."

"TOG's victory is soon to be final. All that separates you from the vacuum of space a couple of tons of fibroplastic armor and your skill. You are sitting on an engine that can push you at 10 Gs, constantly praying that the acceleration compensator doesn't get hit. The fighter carries enough Lasers, Mass Drivers, Electron-Particle Cannons and Missiles to char a city, and you know how to use them with deadly accuracy. You know your ship better than you know your wife. If the predictor computer, or the power coupling, or even the auxiliary helm control takes a hit, you'll know it long before the damage lights come on. You can feel it in your gut. You'd never have lived this long if you couldn't. Join the Elite Forces of either side in this final Confrontation. Hail Caesar! Join the Elite Forces of either side in this final Confrontation."