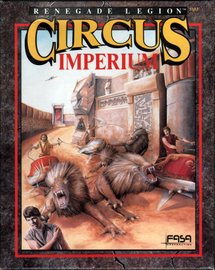 Circus Imperium is the fifth of the Renegade Legion board games published by FASA, but unlike the others in the series, this tongue-in-cheek game of chariot racing is played strictly for laughs.

The game involves anti-grav chariots being pulled by carnivorous beasts, with the object of the game to defeat the other racers, usually by knocking them out of the race or getting them eaten by the monsters. Outcomes of player actions are often random and unpredictable, and players can get points for eliciting laughs or the loudest cheers from other gamers.

Ral Partha produced a series of lead figures for the game, including chariots, senators and imperial guards. Older catalogs have had these figures present as items available to order but in the exchange of BattleTech figures the Identifiers have changed. There were 3 variants under the old Ral Partha banner dependent on country of purchase.

"The year is 6831 and it's Saturday night at the races. On any decent planet in TOG Space, the sport is Anti-Grav Chariot Races -- with a twist.

Circus Imperium, the game of speed and sand, blood and beasts, chases and crashes, guts and groaning, death and taxes.

Anti-grav chariots, pulled by snarling, ravenously carnivorous beasts, careen around the Circus Imperium track, while the chariot drivers and gladiator sidekicks struggle for control of the chariots, victory, and their lives.

Circus Imperium comes with two playing tracks. The larger, used on the best planets, includes a grand and beautiful three-dimensional skybox structure in the infield. The shorter track, used for shady dealing and quick-and-dirty action, includes no structures, but puts the fans close to the fast and nasty action." 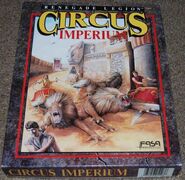 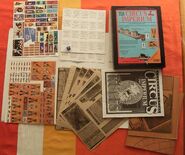