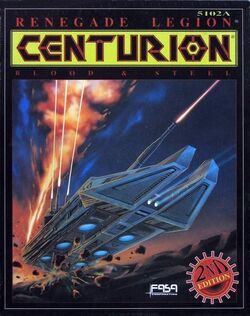 This action-packed wargame covers combat from the platoon to the battalion level, but centers around the company-sized Century.

"You ride in 250 tons of molecularly aligned crystalline titanium wedded to a ceramic ablative shielding. You carry a 200mm Gauss Cannon, two massive 10 Gigawatt lasers, two SMLM fire-and-forget anti-tank missiles, a Vulcan IV point defense anti-missile system, and a medley of other equally lethal weapons. Your vehicle is the ultimate product of 4,000 years of armored warfare. Your life expectancy is less than two minutes. The Terran Overlord Government rules all but a thin sliver of the Galaxy. All that stands in their way are the Renegade Legions and their Commonwealth allies.

Centurion is a game of conventional, and unconventional, ground warfare In the year 6830. Grav Tanks, Bounce Infantry, Hell Hounds, Thor Anti-Tank Satellites, and close air support are all part of this highly mobile, air/land battle of the future. If you want to take a world In a form worth having, you need flesh and blood men of iron conviction!" 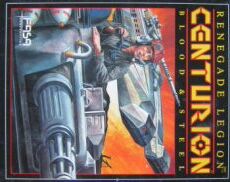