TOG ACADEMY: the Renegade Legion Wiki
Register
Don't have an account?
Sign In
Advertisement
in: A to Z Index, Locations, Locations (Planets), Planets 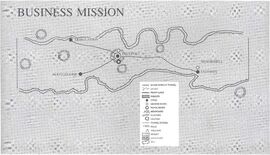 Major Cities (In order of size)

Business Mission, along with two other worlds, orbits the red giant Carbuncle. At the distant edges of the system is the red dwarf Ember, orbiting like a fourth planet.

A windswept world covered with glacial ice and possessed of a thin atmosphere, Business Mission has below-freezing temperatures year-round. Blinding blizzards are common, with few creatures willing to risk travel on the world's surface. That surface is pockmarked with craters from a massive, devastating meteor shower that passed through the planet's orbit about four thousand years ago.

Life is concentrated in underground living environments. An extensive tunnel system connects many of the existing cities under the surface of ice and snow. These tunnels are the lifelines that keep the cities of Business Mission functioning.

It was not until 4204 that anyone showed renewed interest in the world. Orcinus McMichael, the influential speculator, had been developing a planetary stock exchange, free of ties to Terra, for several years. Inspired by the Merchant Races' ability to trade and travel freely in explored space, McMichael combined the two elements and brought life to Business Mission.

First, he managed to pull together a cartel of Human and non-Human investors to back his plans. Based on an old Commonwealth charter, he acquired the rights to the entire Carbuncle/Ember system, then established the Business Mission Stock and Commodities Exchange.

Despite nervous investors, Orcinus poured billions into the construction of Freeport, the first city and the newly incorporated world's capital. Built in the planet's largest crater, this underground city was more like a fortress than a city.

As the Exchange prospered, McMichael built other communities, all of them underground, for both practical and defensive reasons. Linking these centers was a system of tunnels, the basis for the popular saying, "All tunnels lead to Freeport."

The outbreak of the Snow Plague severely disrupted the Commonwealth's exchange system as the Orion Arm became more cut off from Terra with each passing month. The banks and other institutions of Business Mission were ready and willing to receive the ourpouring of monies diverted their way. In spite of the quarantine, the Plague broke out on Business Mission, but did not affect its 60 percent non-Human population. The Baufrin members of the original investment cartel placed long-term trusts held by Human concerns into a holding, which earned a modest rate of interest.

Throughout the KessRith occupation, Business Mission served as a trading hub in Shannedam County. Information and arms became valuable commodities when worlds eventually began to rise against the KessRith. Despite KessRith protests, the Mechant Races continued to sell their wares to any resistance group willing to meet their price.

To curb the arms trade, a KessRith Fleet Commander finally ordered a general attack on Business Mission. Entering the system, the KessRith ships targeted one of the large orbital factories. Just before they fired, the factory came to life, loosing a thousand ship-to-ship missiles. The KessRith command ship vaporized, while moon-based fighters surrounded the surviving enemy vessels. Only one KessRith battlecruiser escaped to warn the Empire of the danger that awaited any force foolish enough to attack Business Mission.

The KessRith attempted to take Business Mission three more times before abandoning Shannedam County, and each time the story was replayed. Deadly ambushes and stunning attacks by the defending Mechant Races of the Holy Cartel protected the planet from the KessRith.

Business Mission funded both sides of the KessRith-Trajan war effort during the rise of Trajan's empire, making a satisfactory profit on the conflict. After negotiating an independent peace with the Commonwealth, the KessRith withdrew most of their investments from Business Mission and life returned to normal.

When TOG invaded Shannedam County, Business Mission once more became a neutral port in the storm of war. Smuggling to worlds such as Caralis and Messana boomed, despite TOG efforts to curb such activity.

Both Commonwealth Intelligence Operatives and TOG Lictors thrive on this world and its strange political position. Information-trading is profitable, and lives are bought and sold every day. Both sides routinely hire assassins and professional mercenaries.

TOG commanders have suggested that control of Business Mission would end the conflicts on Caralis and Messana, but so far they have not attacked. Both Licter EA and IS forces seem to believe that the information gained on Business Mission is too valiable to risk, one of the rare cases in which they are known to agree.

Business Mission is heavily defended, with rumors that the Merchant Races have three mercenary legions on Business Mission and its moon, Riot, where a small commercial ship base exists. So far the rumor has been enough to force TOG to accept the planet's neutrality.

TOG's most recent efforts at conquering Business Mission have been aimed at bankrupting the planet's enconomy. The hidden VCLA used to maintain the round-the-clock stock exchange is a prize target, but all TOG intelligence efforts to infiltrate the trading cartel and to learn the VCLA's location have failed thus far.

Meanwhile, the Renegade underground continues to use Business Mission to ship arms to its many hidden cells of resistance, as well as provide a travel link when rescuing key personnel from TOG-controlled worlds.

The Merchant Races consider 100 AU from Carbuncle (in the middle of the tenth orbital track) to be the limit of their territory. Both TOG and Commonwealth fleets routinely patrol the outer edges of the system, but neither side has made overt intrusions into Business Mission's territory or against its sovereignty (as TOG has on Trader's Paradise). The Merchant Races are nevertheless prepared to face a TOG onslaught.

Many transient, using Business Mission as a base.

Mercantile Conglomerate in the form of interlinked corporate investment groups, with subordinate departmental subsections reporting to appropriate presidents and vice-presidents: answerable to a board of directors made up of elected stock holders. (Elections are by corporate vote, with vote value based on percentage of proxy shares in the hands of corporations headquartered on Business Mission.)

Business Mission's entire economy is based on the exchange of commodities. This world, along with Trader's Paradise, serves as an interface between the various factions in Shannedam County. The planet has little intrinsic value, but it is the site of the largest stock exchange, bond, and futures market within several hundred light years. Business Mission also serves as a diplomatic common ground for contact between warring factions. For over 200 years, Naram, Baufrin, KessRith, Human (both Commonwealth and TOG), and just about every other race have been able to conduct negotiations here. Business Mission is also a free port - there is no such thing as contraband on Business Mission, if an operation has a corporate representative on Business Mission (and has paid the incorporation fees). One can import and trade virtually any commodity, regardless of its legality in other areas of the galaxy.

The planet Business Mission is bitterly cold (its atmosphere lies frozen in its deeper valleys). It possesses a crater-pocked topography, riven by ancient canyons and mountain ranges. Located near the space landing facilities, its single major city (Freeport) is subterranean. It consists of a vast warren of caves, tunnels and grottos that have been reinforced and insulated to an unprecedented degree. Almost all cities on the planet are subterranean, with only a handful being domed surface complexes.

The planet appears worthless, which is why it was ignored and undeveloped for centuries. Business Mission was the brainchild of Orcinus McMichael, an outrageously successful investment speculator in the last century of the Human Raj. Impressed by the mercantile freedom of the Merchant Races, he planned to build an independent Planetary Stock Exchange that would not be dependent upon earth-based financial institutions. Pulling together a cartel of non-human, off-earth investors, he secured the entire Carbuncle/Ember system, and established the Business Mission Stock and Commodities Exchange.

With the collapse of humanity after the Snow Plague, Business Mission fell into the KessRith sphere of influence. In general, this meant a certain amount of stagnation on a marketwide level, but the combined economic strength of its other backers, and investments by high-level KessRith government speculators kept the planet viable and independent. Its defenses made it too tough to crack, and its independent status allowed KessRith officials to avoid the KessRith laws against usury in their investments. It was during this period that Baufrin conservatism took over the Exchange and a number of systemwide static defenses were purchased - these defenses being seen as an excellent way to protect investments.

With the return of Commonwealth rule to the Shannedam region, Mankind picked up the reins of the very-long term investments that had been held in trust for them - showing among other things McMichael's wisdom in establishing the exchange. More hidden defenses were built as, over the next 200 years, profits poured into the coffers of the businesses headquartered here.

Nothing seriously rocked the financial boat until the recent TOG incursion into Shannedam County. Business Mission has found itself interfering with the TOG conquest of the planets Caralis and Messana. Smugglers have been operating out of the Business Mission system in support of the Commonwealth Forces. Overtures by TOG to force the Businessmen to stop this flow have fallen on deaf ears. Businessmen are standing on their traditional neutrality and denying the existence of the smugglers (who, by their definition, are legitimate exponents of free enterprise).

The systemwide defense capabilities (many over 200 years old, and all largely speculative for outsiders) do not daunt TOG. It has been suggested, first in 6818, and later in 6825, that a large attack force seize Business Mission to cut off Caralis and Messana. Every request for authorization to attack has been refused by TOG Theater Political Advisor Nascor Deciperatus. He repeatedly cites the value of information gathered by Lictor External Affairs agents on the planet as part of the TOG trade legation. (Information peddling has become the second most lucrative form of trade on Business Mission, since the TOG incursion.)

When Shannedam County falls to TOG, there may be subtle changes in the operating system on-planet, but most investors feel safe. Business will continue as usual, driven, in all likelihood, by renewed TOG investments, especially middlemen moving in to represent a panoply of high-level Imperial investors aching to reap war profits. Run. This moon serves as an orbital transfer-and-control base for incoming traffic. It only has a small manned garrison. There are unsubstantiated reports of a massive complex of planetary defensive mechanisms in place - construction of some sort has taken place over the last 200 years. Business Mission is said to employ mercenary troops to man these defenses - also unconfirmed rumors but as Business Mission handles all its own space traffic information, unreported flights and shipments could be entering the system without anyone being the wiser.