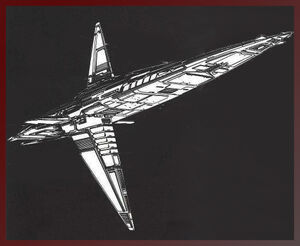 "Battleships are the behemoths of starship design, with a single ship having as much size and tonnage as twelve destroyers. Loaded down with awesome laser bays, multiple-reload missile systems, and substantial fighter contingents, any battleship packs a punch that few ships can withstand, and none can ignore. A battleship group most often serves as the backbone for all major fleet operations. A battleship carrier is the largest ship in service, the Overlord alone being capable of carrying seven fighter wings into combat." [1]

Besides the obvious increases in firepower, fighter contingents and raw power output, Battleships are equipped with the most powerful sensors that can be mounted on a ship, from N-space radio/optical/IR long-range sensors to some of the most sophisticated T-doppler arrays available. Because of this, Battleships are indispensable and irreplaceable assets in 69th Century Warfare.

Because of their strategic value, Battleships are only rarely by themselves; most commonly, they serve at the center of a Battleship Squadron, or similar formation. Even when deployed without a squadron, they are always escorted by lesser warships.

Battleships are generally assigned the designation code BB by the naval forces of TOG, the Renegade Legions and The Commonwealth, both to their own ships and to the ships of other spacefaring races:

Retrieved from "https://renegade-legion.fandom.com/wiki/Battleship?oldid=6559"
Community content is available under CC-BY-SA unless otherwise noted.